I was curious as to how the data on an Apple II floppy was related from track to track on a commercially generated disk.  As the Apple drives do not have an index sensor, sector zero does not need to be positioned relative to the index hole.

As my software records the time of each index pulse, it is relatively easy to line up the data from each track in graphical format.

To the right, you will see a visualization of each of the half-tracks of data from a commercially produced original copy of Choplifter.  The x-axis is the pulses from left to right, and the y-axis for each track is the time it took for the pulse to arrive.  Each track is stacked with track zero on top and track 79 on the bottom.

It is easy to see the data which falls into standard time intervals, and the “hash” that results from the random fluctuations as the heads pass over unrecorded spots on the disk.

Below is an image of track zero.  The beginning portion on the left is an unrecorded portion of the disk.  Then there is a sequence of 4×4 encoding, which is followed by the boot sector encoded in standard encoding as shown by the third line indicating 12 microsecond intervals.  A short burst of unrecorded data is followed by a large number of 4×4 encoded bytes.  Lastly, the remaining space on the track is unrecorded.

Interestingly, this disk is entirely encoded in 4×4 format, other than the boot sector.

Information regarding the Choplifter boot process can be found at the below links:

And for a visualization of how the heads read the above data: 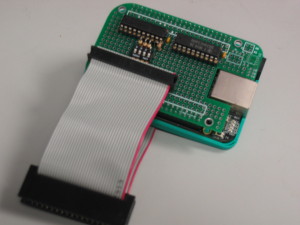 The Central Point Deluxe Option Board can be used to read floppy disks written on an Apple II in a standard 5.25″ drive on PC running DOS.

The TransCopy (TC.EXE) software automatically detects some Apple disks and copies them to an image with one track.  The result is a bit-level image of the disk much as an Apple disk controller card would see it.

One issue with these images is that the image contains only one copy each track.  This can be used to make standard disk images, but often more data is required if a sector crosses the index pulse.

Fortunately, the TC.EXE executable can be patched relatively easily.  Changing 8 select bytes will cause TC.EXE to believe that every disk is an Apple disk, and copy 16Kbytes or even 32Kbytes of data to the image file.

Before the TC.EXE executable can be patched, it must be unpacked.   This is done with an unpack tool, such as can be found at: http://ftp.sunet.se/pub/simtelnet/msdos/execomp/unp411.zip

Running unpack on the 5.40 version of TC.EXE results in:

The unpacked version of TC.EXE can be patched in two ways, one with the standard DOS debugger, or with a hex editor.

To patch the software with debug, the following can be done:

The first assemble command forces the program to detect all disks as Apple II disks.  The second assemble causes it to save 0x4000 bytes to the image file.  While the 4000 can be made larger, keep in mind that the DMA process will only load 64k at a time.  The final alteration changes the DMA count table to capture 0x4000 bytes (times two).  This should also be adjusted for even larger images.

The resulting program is run and will output images that are 0x4000 bytes in length.

To adjust the software in a hex editor, simply alter the following bytes and save:

or, to capture 32Kbytes at a time:

On my system, I have noticed that there is usually a burst of invalid data immediately after the track ends. However, data following it is valid until the end of the capture.

Information regarding the TC.EXE image format can be found here: ftp://ftp.blarg.net/users/genet/image_format.txt

Each track can be found by using the four bytes at 0x305+track*4 and shifting the results 4 bits left to obtain the index for the track within the file.

These tracks are captured starting immediately after an index pulse is detected and are thus index aligned.

I have had some success with extracting the last 16Kbytes of each track from an 80 track 32Kbyte TC.EXE image and duplicating them twice to create a standard quarter-track EDD disk image and using the image in an emulator.

At VCF MidWest this fall, I demonstrated how I had reverse engineered a credit card terminal and reprogrammed it to run CP/M.  While there, there were several discussions of what to do next.  During these conversations, I realized that by turning the terminal sideways, I could use it as a display for Tetris.

END_OF_DOCUMENT_TOKEN_TO_BE_REPLACED

For VCFMW last Fall, I ported the Infocom interpreter from the Apple II to run on an Apple 1.  This process included taking Eric Smith’s disassembly and creating a small patch utility to use the CFFA1 as the disk drive and adjust for the Apple 1 display and keyboard input.

At the time, I described the process in a posting at applefritter.

However, with the inclusion of CFFA1 emulation in MESS, it is now possible to emulate the hardware configuration on a system other than OpenEmulator.

Starting MESS with the the interpreter and data file located on a virtual compact flash card requires loading the image with the zip.bin interpreter (composed of the patcher and original Apple II interpreter) and then changing to the directory where the game’s data file is located.

Once this has been done the patcher can be run, and it patches the original Apple II interpreter to redirect access to the keyboard, display, and disk drives to the routines that I have written.  Once the patch is complete, the interpreter is started and the game commences.

While most of the details regarding the creation of the compact flash image are located in the original applefritter article, here is a link to a local copy of the original preload.zip file.

For the above examples, I have combined the contents of preload.zip with the original revision A interpreter from an Apple II into one file called zip.bin and used infocom.dat as the name of the data file in the zork1 directory.

Below is the original applefritter posting:

I have uploaded a zip file containing the small “preload” code that patches and then executes the Apple II version “A” z-machine interpreter. The patches allow the interpreter to use the CFFA1 as storage as well as to properly access the display and keyboard of the Apple 1.

In order to use this, you will need three things, besides the Apple 1 (replica or emulator) and CFFA1.

1. The preload utility
2. The Apple II Infocom interpreter version “A”
3. The datafile for the Infocom game (version 3/z3 games only)

All three of these items should be placed on the compact flash card (or image) as:

Using the CFFA1, load PRELOAD.BIN at $0500 and ZIP.BIN at $0800. Then quit the CFFA1 menu and execute 0500R from the Woz monitor. The preloader will patch the interpreter, and start executing it with the current game stored as INFOCOM.DAT.

Version “A” of the interpreter can be spotted on games that when run on an Apple //e do not prompt for 40/80 columns. I found it on a version of Zork III. Using the technique found in the Infosnarf package, this can be obtained by loading the game, and at the prompt hitting reset. Move the game temporarily out of the way by issuing *4000<0800.08FFM, boot a DOS 3.3 disk without a hello program, restore the original version by using *0800<4000.40FFM, and save with BSAVE ZIP.BIN,A$800,L$1A00

The original instructions from Infosnarf can be found here: http://apple2.org.za/gswv/a2zine/Utils/InfocomProInfo.txt I found that I had to adjust the first two bytes to read D8 A9, as indicated.

Alternatively, some emulators allow the saving of memory directly, which may be easier for some individuals. Appending the ZIP.BIN to the PRELOAD.BIN can save an extra step as well.

Typically, I load the compact flash card with the following tree (using preload+zip combined as ZIP.BIN)

This allows me to load the two bin files into memory, and then select the game with the prefix command. The interpreter will save/restore games into the current prefix as well, which allows a user to not interfere with other saved games. If saving a game fails, verify that there is sufficient space left on the Compact Flash card (or image.) Saved games should always be done to the default disk 2, although positions 0-7 can be used.

This has been run on an original Apple 1 with a CFFA1, OpenEmulator, and a modified version of the MESS emulator (to add the CFFA1.)

Thanks go to Eric Smith for his disassembly of the Apple II version “A” interpreter.