Assembly of the OSI-300 Mini is fairly straightforward.  I typically start with the shortest height parts, and work up to the tallest.

A schematic of the PCB board can be found atminitrainer.pdf

I have found that I can test the board without the CPU and SRAM to ensure that the switches work properly by turning off/on the LEDs with the RUN switch set left.

I’ve found that while programming, it is necessary to ensure that the RUN is left and RST is right. To run the program, switch RST left, then right, then switch RUN right, followed by RST to the left.  This sequence ensures that the clock starts properly.

Paul has also pointed out that the reset address used in the OSI manual needs to be adjusted due to the extra address lines.  In place of 7C and 7D, you will want to use FFC and FFD.

Update: at this point due to issues with the postal system I no longer will be mailing kits.  If this changes, I will update this post. 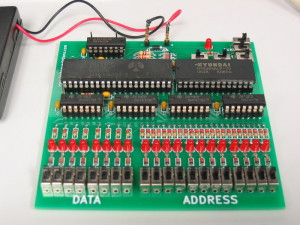 The final tally of parts is:

The mini trainer requires a 5v 1Amp supply to operate, although it does run fine from four AA batteries. 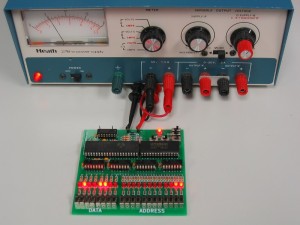